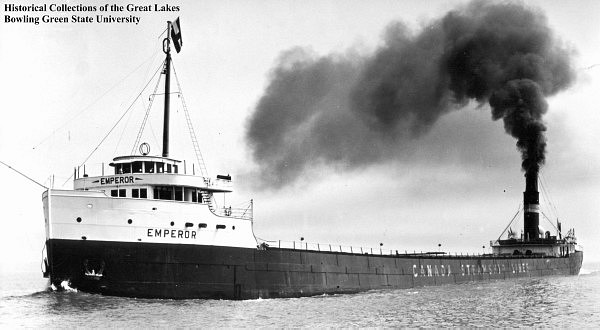 (Official No 126654) :
Although the Emperor was the last ship to sink at Isle Royale, it was by no means the last ship built of the ships sunk at Isle Royale.  In fact it was built before both the Kamloops and Congdon, which are the other two intact steel shipwrecks on the north side of the island.  The Emperor was built in 1910 by the Collingwood Shipbuilding Co. in Collingwood, Ontario, for the Inland Lines Ltd. of Midland Ontario.  It was later sold to the Canada Steamship Lines Ltd.

The Emperor was 525 feet long, 56 feet in beam, and had a depth of 27 feet.  It was powered by a 1,500 horsepower triple expansion steam engine with a 42 inch stroke and cylinders of 23 inches, 38.5 inches, and 63 inches.  Its two Scotch boilers delivered steam at 180 psi.  The propeller turned at 82 revolutions per minute, which pushed the ship at a registered nominal speed of 10 knots.

After a thirty-seven year career on the Great Lakes the Emperor's story abruptly ended in tragedy at Isle Royale on June 4, 1947.  After loading 10,000 tons of bulk iron ore at the Port Arthur Iron Ore Dock, she departed Port Arthur at 10:55 pm. on June 3, 1947 with Captain Eldon Walkinshaw in command.  At midnight the watch was turned over to First Mate James Morrey.  Unfortunately First Mate Morrey had just been in charge of loading the vessel for six hours scarcely three hours before.   It was judged at the inquiry that his fatigue probably contributed to him not making the normal navigational checks as the ship headed toward Passage Island.  Unfortunately the new helmsman, unfamiliar with this part of the lake, also did not catch the error in the ship's heading.  At 4:15 am on June 4, 1947 the Emperor ran hard on to Canoe Rocks and sank within 20 to 30 minutes killing twelve of the crew including both Captain Walkinshaw and First Mate Morrey.  Most of the casualties occurred when a lifeboat was sucked under by the ship as it sank.  Luckily the US Coast Guard Cutter Kimball was in the vicinity and  was able to reach the site within 30 minutes to pluck the nearly frozen survivors from June's cold Lake Superior waters.

Three of the Isle Royale shipwreck tragedies came with a major loss of life the Algoma, the Kamloops, and the Emperor.  Of these the Emperor had the fewest casualties, but no less painful to those involved.